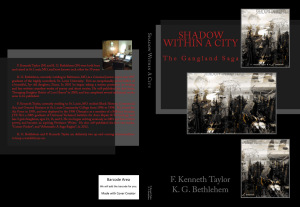 Here is an excerpt from Shadow Within A City from Chapter 11 (Strange Visitors).  BloodOath is visited by something or someone.  His mind is indeed a clouded place but he must realize he is the only one who can find peace.

If he wants it…

The dim light of the lair was a comfort. Hallways filled with smoke as the sound of typing were heard. The daily operations went undisturbed. Even when he worked with Gangland, his underling commanders ran the Ghost Squad assignments. They reported to him only if anything was amiss, which seldom happened. He sat back down after closing his door. He turned off the lights and lit a candle, giving a grim glimpse of a portrait on the wall—A picture of his father. At times he uttered curses at it, but sometimes, these quiet moments, he conversed with it. The darkened room made the walls glow a soft light, like the moon rested among them and invoked magic of sorts—dark magic.

Then, all of a sudden, an apparition appeared. Quietly, like a child resembling himself when he was approximately five years old. Was he dreaming? Were his eyes closed? His Heart was just waiting to explode. He turned his head towards the being. It just stared, looking blankly, right in front of him. It’s eyes were hollow, like an old log in the woods; it just stood there and BloodOath just sat there.

An unspoken code, communicated that both knew they were there. Both knew they needed to be there. The entity walked closer and BloodOath stretched forth his arms wanting to hug it—It went right through him—then it was gone. He continued to sit—unmoved to what he had just seen or if he had seen anything at all. His eyes rolled back as the candles blew out from an unknown cool breeze, even though there were no windows. He smirked honestly, as he felt ‘whole’ somehow, at least for the moment. An evil attraction. He spoke as a child again, asking questions of science and business affairs. It was the only time they spoke sincerely; the only moments he cherished besides his past memories of love—He heard more voices. . .

the moonlight dances upon watery grounds

peace, chaos yang into one…

He rested his head on the back of his chair, eyes closed, as his cheeks rustled like unsettle waters. A cool breeze covered his skin and sent tiny chills among this forefingers. The voices kept talking—mumbling a low hum from the previous banter until now.

It strengthened again to unsubtle words of past foreshadowing…

Of Mary who sought to kill,

Is all you should know…”

At last he was sound asleep; strangely enough the voices consoled him—Or maybe it was his version of peace.

2 thoughts on “Shadow Within A City—Strange Visitors..”

A glimpse into the mind of a half mad poet

Gather 'round and hear a tale...

The Inner Workings Of An Anxious Mind

[catharsis for a spinning mind]