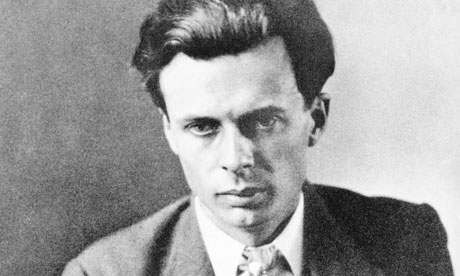 “It is a bit embarrassing to have been concerned with the human problem all one’s life and find at the end that one has no more to offer by way of advice than “Try to be a little kinder.”

He gave way to the essence of ones self in relationship to society to which society was growing way too fast, devolving into an insensitive authority. He look at the way of how so many things are very antisocial. You are just a number in a machine. The working environment of a collective state called society.

Aldous Huxley, as I can gathered warned against us as a whole giving up control of our lives to the governing power with no need of an aggression as a mandate. The mandate is what we see in the form of entertainment and self-gratification.

We want news fast, so cable news 5 minute segments of financial reporting followed by 15 minutes of editorial that may or may not be bias feeds our need for information.

We craved sports; football, basketball, baseball but more importantly than the sports themselves, the art of competition is second to the side-show theater. The personal lives of a star athlete that has nothing to do with the sport itself. Reality television out of control.

Reality television is taking place of informative shows on television that would actually attempt to teach one of various subjects from a liberal arts standpoint. Now we get to see who can get by or the creation of a false hood drama for our entertainment. Main example; look at history channel for half a day for validation to my assumption. Reality television does not stop there with the numerous shows of people hunting for love, sex, food/tattoo contest, etc.. I will not explore too much into this subject matter but made up drama with no “real” conclusion of merit to what we are actually viewing is merely junk food for the brain. Where is the value in that?

I appreciate Aldous Huxley version of the future; from a Brave New World (and BNW revisited) to Perennial Philosophy (even though this book tackles religion, and philosophy) looks into the dogma teachings of old society as it rebirths, re-teaches to the next generation but introduces critical thought into East & West Mysticism with honest interpretation. Now I am not an authority on Mr. Huxley but what I believe, my opinion is that the combination of rational thought for the improvement of a society is of value as long as it respects the individual utopia of the citizen.

It is time to step out of a dream, dismiss the fruitless technologies (Ipads, PS4s,Xboxs, new music vids, even though in balance they are fine but unbalance they are not) that involves our thinking way too much from knowledge gathering. Corporation News which the entire major media markets are own by a few (4 or 5 companies I believe?) that is expanding this Media Industrial Complex?

Take a look at this video in which Aldous Huxley was interviewed by Mike Wallace on May 18th 1958. Very insightful into an insightful mind.

Where Myths Are Maybe Real